One sixth of the world’s population, that’s one billion people, currently live in some of the most inhospitable conditions imaginable in the urban world. Some hoping to escape rural living to what they thought would be a better life, end up stuck in much worse: the city slums. Imagine not knowing when your next meal will be or whether it is safe to walk outside. Imagine not knowing whether or not you and your family will even have a future.

The Fourth World is a “Discovery Channel” style documentary that takes you into three different slums from around the world: one in Nairobi, Kenya; one in Guatemala City, Guatemala; and one in Manila, Philippines. The film gives you a glimpse into the lives of five slum dwellers and what they go through to try and survive in their day-to-day lives. 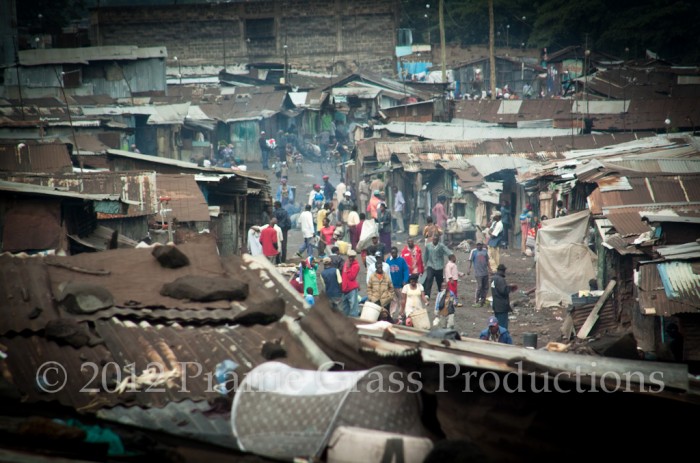 According to the United Nations, “a slum is: an informal settlement with inadequate access to safe water, inadequate access to sanitation and other infrastructure, poor structure quality of housing, overcrowding, and insecure residential status.” Slums are generally found in third world / developing countries, hence the film’s name, “The Fourth World”.

The film crew first travels to Nairobi, Kenya to the slums of Mathare Valley. There we meet Pastor John Makwata, hear his story, and learn a little about the Mathare slum. We also meet sixteen-year-old schoolboy Felix Ochleng. He wakes up at 4 a.m. everyday and goes to the market to buy corn so he can make corn treats to sell. After a long day’s work, he makes a profit of just a handful of cents an hour. Pastor Makwata believes that the only way for people to have a chance to get out of the slums is for them to become educated and learn their rights as citizens. After Kenya, the documentary takes us to Guatemala, where we meet a beautiful young lady named Tanya. Tanya grew up and lives in the slum of La Limonada in Guatemala City with her father. Tanya, who has been wheelchair bound since she was a teenager, shares her story with us. She also says, that her father believes that God is the one who gives her strength to get through each day.

Next, we meet Selma, also from La Limonada Slum. Out of all the stories shared in The Fourth World, hers by far is the most tragic. Guatemala is known as one of the worst places for women in the western hemisphere. Her story is no exception, and will make your heart hurt that any child had to endure this. She says that she just wants to feel truly valued and loved. Lastly, the film takes us to Las Piñas slum in Manila, The Philippines. The story follows a schoolgirl named Jovelyn and her family who live in a makeshift house under a highway bridge. The entire family has to work long hours for just a little bit of money. Sometimes, the family will go many days without eating. To Jovelyn’s father, education is the most important thing, something he didn’t have. He said that education is the key to giving his children a chance at a better life.

Filmmaker and Producer Mark Volkers, an instructor of digital media at Dordt College in Iowa, is an award winning photojournalist and documentary filmmaker and it shows. The cinematography in The Fourth World is superb; close to any cable documentary show. The Fourth World took three years to make, along with the help of several teams of Dorbt College students through Prairie Grass Productions. The overall production quality and presentation sometimes shows a bit of inexperience, but reaches surprisingly close to professional standards. Some of the transitions are a little rough, with a couple of awkward, long pauses in some cuts. For the majority of the film, the sound is well done, especially the narration. With those minor nitpicks aside, the message of the film came through loud and clear. When the film ended, I was left with a longing sense of wanting to help these people living in the slums. Other viewers are likely to feel similar. The film is extremely well researched in the current and possible future problems of the slums, but does little to present possible solutions. The good news, however, is that The Fourth World does come with a downloadable PDF called “Neighborhood Watch and Discuss” on the film’s website: www.fourthworldfilm.com. This guide has a few questions that could help spark some great conversations of how your group, whether it’s you and your neighbors, a homeschool, public school or church group, could make a difference. Make it a project, big or small, and see what you can do to make a difference in the lives of people living in these intense poverty stricken areas.

The Fourth World is a film that brings you stories of hope for change, and some stories of lost hope and desperation. It shows how strong the human will is to live, and to thrive. One thing is for sure; these people are just like us, full of talent, full of dreams, searching for hope, and they deserve a better chance at life. The United Nations expects their numbers to double and even triple in the upcoming decades. The film makes it clear that the slums and its people are becoming something that the world is not going to be able to ignore much longer.

Overall, The Fourth World is a good film that will leave a lasting impression on you and your family. The Fourth World is a secular documentary made by Christians to show you what life in the slums and true poverty is really like. There is one occasion where we hear someone say, “God why have you allowed these horrible things to happen to me?” and another story mentioning that they are getting their strength from God. But overall, there is not a religious theme in the film.

There is no visual violence (only talked about), nudity or bad language in the film. Due to Selma’s story about the sex trade and other things that happened to her in Guatemala, I would recommend this film for a minimum of ages 10+. To learn more about the author of this review, visit April Kruger

For more details about The Fourth World, check out Christian Film Database