In an exclusive interview on the Red Carpet for the 24th Annual Movieguide Faith Awards, Director Stephen Kendrick told how the Awards and Gala put “wind into the sails” of his faith-based films and that of his colleagues in redemptive filmmaking honoring faith and family. On February 9, Fox News reports that Stephen Kendrick has said that he and his colleagues want “more faith and family in Hollywood.”

Kendrick says, “Faith in God can transform positively every area of your life… Our culture needs light and not just more pointing out the darkness that is going on around us…so many movies that come out, they just expose the evil around us but then they don’t turn on a light or give a direction to a path we should go. So we are trying to do that as best as we can…” Stephen Kendrick on the set of hit film ‘Courageous’.

In Hollywood at the Movieguide Awards and Gala, Epiphany Prizes for Inspiring Movies & TV, supported by grants from the John Templeton Foundation, were given. The $100,000 Epiphany Prize for the Most Inspiring Movie of 2015 went to War Room with Stephen Kendrick graciously receiving the prize on stage. Other nominees for this award included: The 33, Brooklyn, Captive, Do You Believe?, Manny, and Woodlawn.

Also supported by a grant from the John Templeton Foundation, the $100,000 Epiphany Prize for the Most Inspiring TV program of 2015 went to Dolly Parton’s Coat of Many Colors. Lily Tomlin enthusiastically announced that this award went this year to Dolly Parton’s TV program. Actor and ‘Do You Believe?’ Producer David A.R. White with wife Andrea and Alysoun Wolfe.

The Ten Best Movies for Families were awarded, clips from these movies screened, and the awards graciously received on stage by producers, directors, and/or actors with these movies.  Home was the top movie in this category. The rest included: The Peanuts Movie, Cinderella, The Good Dinosaur, Inside Out, Max, Shaun the Sheep Movie, War Room, Paddington, and The Spongebob Movie; Sponge Out of Water. On the Red Carpet in an exclusive interview with Sonoma Christian Home, Craig Schultz (writer/producer for The Peanuts Movie and son of creator Charles M. Schultz), talked about the importance of producing movies with timeless messages that do not embarrass and shock audiences.

The Ten Best Movies for Mature Audiences were also awarded, with clips from these movies screened. The 33 was the top movie in this category. The following movies were also honored: Joy, Mission: Impossible – Rogue Nation, The Hunger Games: Mockingjay – Part 2, McFarland USA, The Martian, Captive, Avengers: Age of Ultron, Jurassic World, and Ant-man. David Oyelowo of Selma fame graciously received the award for Captive on stage and Producers Ken Wales and Brian Bird were likewise gracious on the Red Carpet. The $50,000 Kairos Prizes went to Spiritually Uplifting Screenplays by First-Time and Beginning screenwriters. The Kairos Grand Prize (worth $25,000) went to Wayne Sable and Christopher Lovick of Los Angeles, CA, for Heaven’s Messenger. The 1st runner up (worth $15,000) went to Harry Keinman of Biloxi, Miss., for Wind and a Prayer. The 2nd runner up (worth $10,000) went to Birgit Myaard of Alice Springs, Australia for The Hand of a Woman. 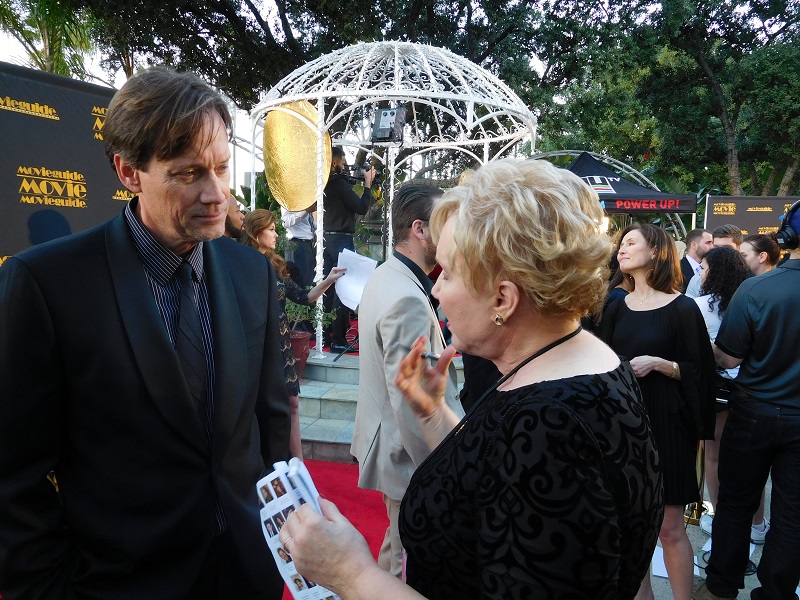 Interview with actor and producer Kevin Sorbo on the Movieguide Red Carpet for SCH; Photo Courtesy of Dr. Diane Howard.

Other nominees for this award for Best Performance by An Actor were the following: Antonio Banderas for The 33, Sean Astin for Woodlawn and Jon Voight for Woodlawn. Kevin Sizemore and Andrew Erwin of Woodlawn were both glad that the film has been a top-selling/popular movie in the Sports category, as well as in African American and Drama categories. The special award for lifetime achievement went to Ken Wales, producer of Revenge of the Pink Panther, Christy, Amazing Grace, Captive and more. Ken was a dear, humble, kind gentleman on stage and in an exclusive interview on the Red Carpet where he shared how he has watched and celebrated the remarkable growth of family and faith movies over the past 25 years.