Based on a true story, Woodlawn is an inspirational film about an incredible football player who must embrace his faith as he battles racial tensions on and off the field. The words above from Pastor and Civil Rights Leader Martin Luther King, Jr. set the stage for this story of God’s power and grace in the life of one high school student, faced with a monumental choice.

Directed by the Erwin Brothers of October Baby fame and set in Birmingham, Alabama, this film takes viewers on a journey leading out of hatred and division and into a place of love and unity.  The film boasts an all star cast including, Jon Voight (as Paul Bryant), Sean Astin (as sports chaplain Hank), and Sherri Shepherd (as Momma Nathan).

SCH:  Nic, what drew you to this role?

NB:  For me, it always starts with story and character.  I think, is this story I want to see? Is this a character who I want to spend the next 8 weeks with, stepping into this role for sixteen hours a day?  Those boxes where checked off for me.  The story is an exceptional story.  The fact that it’s a true story, that all these events actually happened during a very interesting time in history, and to think that it’s a sports film, I thought, I’m just going to grab this with both hands and jump in.

SCH:  While filming, were you personally affected by the experience of playing this role?

NB: We had a lot of long hours and night shoots.  I felt a bit like an outsider coming into it.  Everybody else knew the American football world very well.  I’m Australian.  I knew the competitive sporting world but American football with all its rules and regulations was a new thing altogether.  I wanted to make sure that every single coach in America could look at this film and think, I believe this coach. SCH:  Kevin, as believers, we know that the lasting remedy for humanity’s problems is Jesus. I’m wondering how that truth played out with the cast and crew of Woodlawn?

I’d like to think someone watching could take a look at my life and think to him or herself, I like the way he carries himself. If that makes them wonder about my faith, then fantastic!  There’s no way I want to push my beliefs on anyone.  I brought a friend of mine to a screening of the film.  He’s an atheist.  After the screening ended, he said, “Look, I know there’s some Jesus talk in there but this was a good movie.  I forgot all about the Jesus talk.  It was awesome!”  That’s the sort of audience I want to target with this film.  I want people to walk out of theaters thinking.

SCH:  It seems like the Erwin brothers have their finger on that pulse.  They do what they do really well.

KS: Yes, they do.  And with this film, they are talking about events that actually happened during the 70’s, during The Jesus Movement, so we sort of have a free pass.  We have the liberty to talk about actual events.

NB: They were so wise in using my character, Tandy Geralds, as the skeptic or cynic.  Without that element, this would have been a different movie, whether it was played by me or someone else.  Having that voice there to say, “Hang on.  What’s this madness?  This is unlike anything I know.  How am I supposed to wrap my head around this?” That to me is one of the huge strengths of this movie.  The character who is looking around saying, “What is happening here?”

KS: The fact that historically speaking, there was an actual reluctant hero placed in the true story which would come to screens later, is pretty incredible. 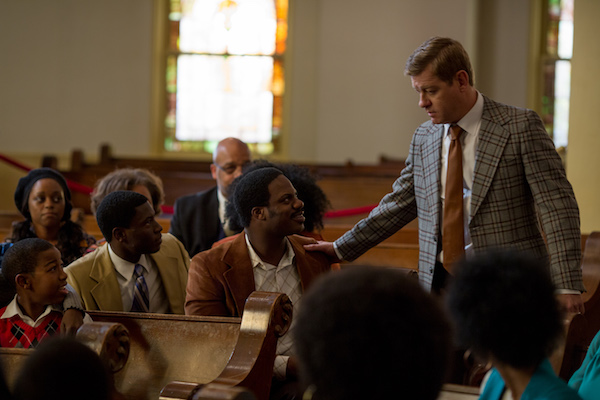 NB: Yes. To think that somebody actually lived this experience and that I was lucky enough to portray him on film is pretty remarkable.

SCH: As a nation we are in this heartbroken moment after the Roseburg, Oregon shooting, where students were killed specifically because of their faith in Christ.  Your film speaks a message of hope. Woodlawn is so timely.  Do either of you have a word of encouragement for students during this time?

NB: I hope that a lot of people who are struggling with their faith go and see this movie.  I hope that they go and sit in a dark theater for two hours and get a reminder of what the potential for life is.  I want them to see what human beings can achieve if we all get on the same team and rally together and work towards the same goal. Students should look for someone they trust, love, and respect, someone they can be guided by.  That’s what Tandy Geralds, Jerry Stearns, Bear Bryant, and Hank Erwin…that’s what these good men represent.  They stand up for what they believe in and they guide young people in a positive direction.  Everyone needs that sort of guidance in his or her life; no matter what shape or form it takes. KS: Jerry Sterns died four days before we wrapped the film and I had the awkwardness of playing a character that passed while I was playing him.  I will always be grateful for this.  I got to witness Jerry visit the set.  He got to see all those Woodlawn players from years ago that came back for the day.  They all said the same thing.  “Coach Sterns was someone who got me through this or that.  He was a father figure.”

Nic and I both have kids. We want our kids to surround themselves with people who are positive and uplifting. It’s so easy to get into a group where people start to do one or two crazy things and then, all of the sudden; you’re guilty by association.  And if you don’t have someone wrangling the troops, a parent, a teacher, a coach… If you don’t have that person, well, that’s why we are seeing so many problems.  We all need someone to hold us accountable.

SCH:  Right, a football movie of all things!  This film could definitely be a catalyst to stir people out of their apathy.  Can you share a favorite memory from set or behind the scenes? Moved by the change in his players after they come to Christ, Coach Tandy Geralds (Nic Bishop) gets saved and baptized; Photo Courtesy of Pure Flix Entertainment.

NB: It was a very heavy subject matter in a lot of ways.  There were a lot of big emotional moments but we had a lot of laughs.  We had so much fun making this film.

KS: Nick and I threw a football with Jon Voight on Legion Field for thirty minutes.  That was really cool.  But, the most important take away for me is the connections I have with the people I met during the filming.  I appreciate the friendships.  When you do a movie whether it’s good, bad or indifferent, you walk away with friendships.

SCH:  There was a real moment in time when football was more than football.  A time when players and coaches came together under the guidance of the Holy Spirit to actually help bring about social change.  If God so chooses, Woodlawn can really be used as a tool to change hearts. 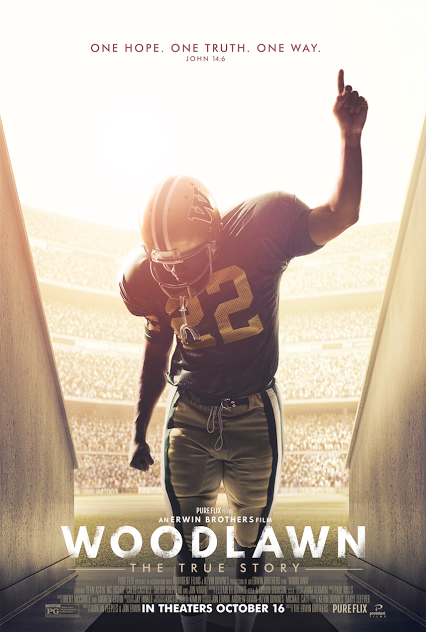 NB: If people are entertained and walk out with a smile on their face or a tear in their eye, asking questions and thinking, that’s when Art is really powerful.  And because this movie is rated what it’s rated, there’s no sex, drugs, and rock & roll, it has the potential to reach audiences of all ages.

KS: Yes, it does. Churches around the country and the Fellowship of Christian Athletes are buying up seats and taking kids to see Woodlawn.  I encourage people to get out opening weekend and make a statement with their ticket purchases!   In theaters, October 16th, be sure to see Woodlawn.  And bring a friend.  You will not be disappointed.  In fact, you will be enlightened, encouraged, and inspired!