Ray Comfort’s pro-life movie, 180, has been impacting viewers since it’s release. To date, 5 million people have see this pro-life movie, which poses a question to eight different people about their opinions on abortion. Their answers change everything. The message and the meaning behind this film is spreading across social media.

Available to view online at no cost, the pro-life move, 180, is opening doors and hearts for life changing conversations.  While many political issues are being debated during this election year, the pro-life movement wanted to insure to keep this issue in the forefront. Viewers are responding by the millions.

More than five million people have watched 180, the powerful award-winning pro-life documentary that shows eight people changing their minds about abortion in seconds, because they were asked one question. 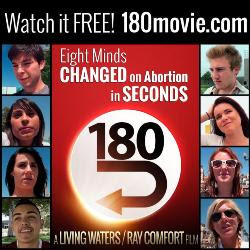 Ray Comfort, the film’s producer said, “This is an election year and we were concerned that abortion was going to get a back seat, so we have re-released ‘180’ with a new website to draw attention, asking people to watch it before they vote.”

Over one million DVDs have been sold or given away. Along with the new website comes a new video of a mother who was going to kill her baby, who watched “180” and changed her mind.

The 30-minute reality-style documentary has been commended by many Christian leaders, including John Piper who said “I give my unflinching, joyful, trembling Yes to ‘180.’” New York Times bestselling author Randy Alcorn said, “Mind-blowing and unforgettable!” Dr. James Dobson said, “I was deeply moved by it…That is powerful stuff!”

The movie can be freely seen at 180movie.com